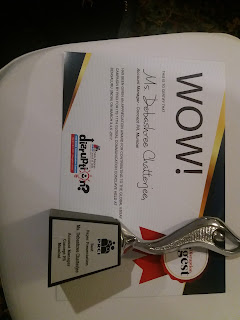 20
what are the features? what you can and cannot do at payments bank!

A #Payments bank is a bank where you can deposit money, earn interest on it, use it for remittance services, Payments, transfer, net-banking and third party transfer. However, Payments banks cannot give out loans, issue credit cards. The maximum amount deposit is capped at Rs. 1 lakh.

The main objective of launching these banks is to reach out to the maximum population without much infrastructure requirements, with help of technology. These banks are beneficial for small businesses, low-income households and places where the full-service banks are not present or unable to address the needs of the low-income or small business owners, migrant workforce etc. With this initiative, RBI aims at reaching the remotest areas of the country. For ease of use and stay away from ambiguity, RBI has made it mandatory to use “Payments Bank” mandatorily in the name. As per RBI guidelines, Payments Banks must of 25% of its branches in the un-banked rural area.
Payments Banks work very well in the rural India, complementing government initiatives of financial inclusion. It will empower those citizens who have only transacted in cash, to head towards formal banking.
Presently, we have Airtel Payments Bank and soon PayTM is launching PayTM Payments Bank and IndiaPost Payment Bank.
As Airtel Payments Bank is already functioning, let us just have a glimpse of what it offer? 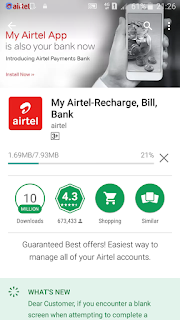 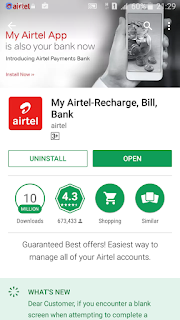 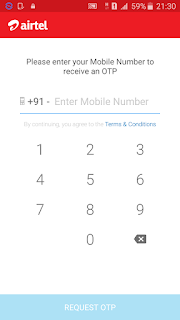 You have to enter your Aadhaar No. to get started. 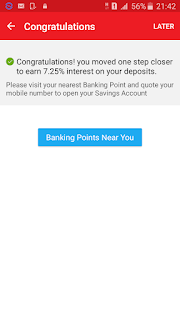 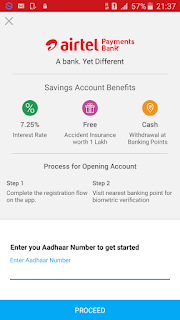 Then the page takes you o register your PAN details, annual income and profession 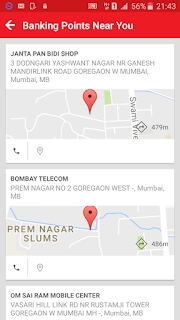 Then next page you have to fill in the nominee details

It takes you to page – Banking points near you
Features
1. An account can be opened with Rs. 100, can deposit upto Rs. 1,00,000. No charges on cash deposits, in case of cash withdrawal,
2. Customers can withdraw money as low as Rs. 10
3. Fee for withdrawal is Rs. 5-25, if the amount is between Rs10 and Rs4,000
4. 7.25% interest on savings account
5. Free accident insurance worth 1 lakh
6. Can be used for mobile recharge, sending money, paying utilities bill, pay in shop etc
7. Intra-bank transfer within Airtel Paymentss Bank via Internet banking, mobile app or USSD is free
Freebies along with it
1. 15% cash back on CCD
2. 5% Extra cash back on Apollo Pharmacy
Convinience come with some charges –
1. Withdrawal charges for customers have to pay Rs5-25 for withdrawal of Rs10 to Rs4,000
2. Customers have to pay 0.65% of the withdrawal amount above Rs4,000, for withdrawing Rs. 10,000, customer needs to pay Rs. 65.
3. Digital transfer of money from Airtel Bank to other bank will charge 0.5%
4. Intra bank transfer to Airtel Payments Bank using bank point – 0.5%
5. Money transfer from Airtel Payment Bank to any other bank using bank point  1%
6. Account closure charges Rs. 50


What you can’t do with Payments Bank?
1. No credit card
2. Cant avail loan
3. No deposits over Rs. 1 lakh
4. NRI deposits will not be accepted.
Please follow and like us: